Everyone Still Eats These 10 Products, and It’s Crazy 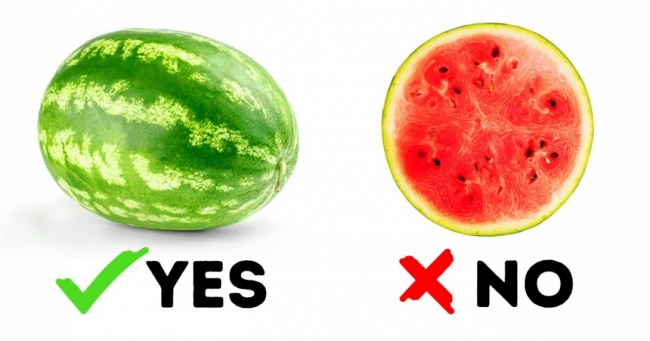 The FunnyModo team studied much research on the topic of food safety, and some conclusions surprised us. It turns out that a lot of “healthy” food is a threat, and we had no idea about it.

Of course, it would be perfect if we followed the experts’ example and completely refused the products from our list, but reason says you can simply limit them in your diet and find an alternative if possible. 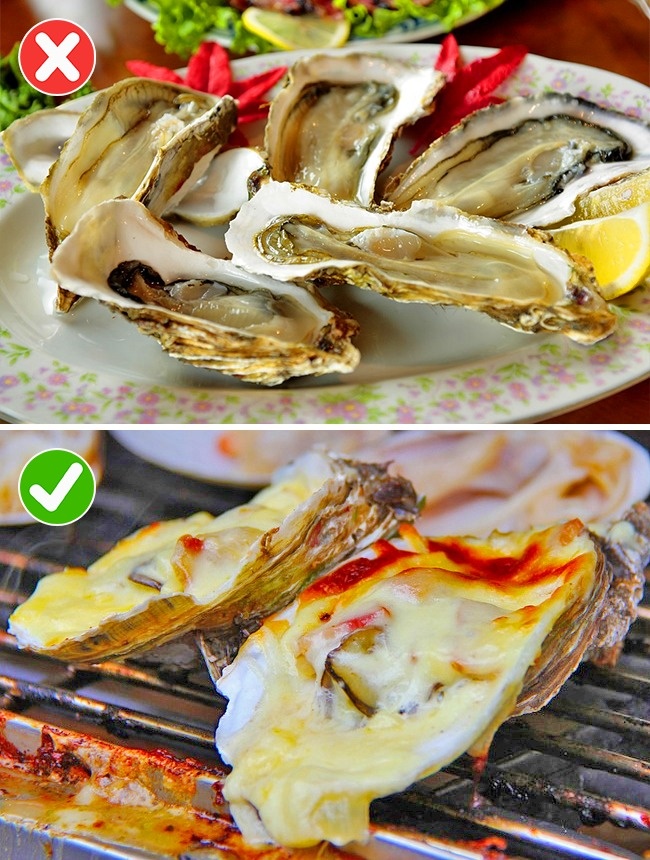 Why they’re forbidden: American lawyer Bill Marler has worked with food poisoning cases for more than 20 years. During this time, the man became an expert in this field and decided to share with the whole world why he would never eat raw seafood. Due to the warming of the water in the World Ocean, raw shellfish is a favorable breeding ground for many new species of bacteria.

What you can eat instead: Baked oysters with spicy sauce taste just as good. 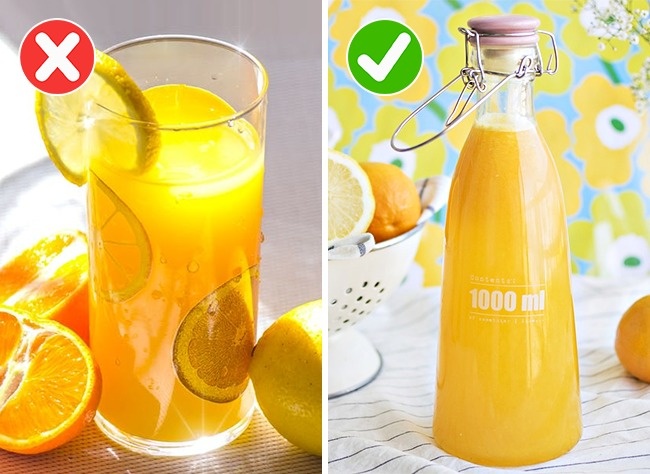 Why it’s forbidden: Freshly squeezed juice can cause infection with viruses and bacteria. In this case, the risk exceeds the benefit.

What you can drink instead: If you want a drink, you’d be better off with pasteurized juices. Yet if you want all the vitamins fruits can offer you, the perfect option is to eat fresh fruit. 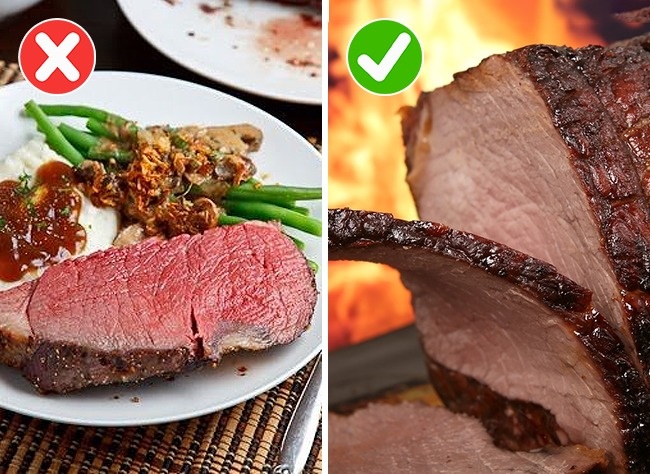 What you can eat instead: Medium-well and well-done meat. 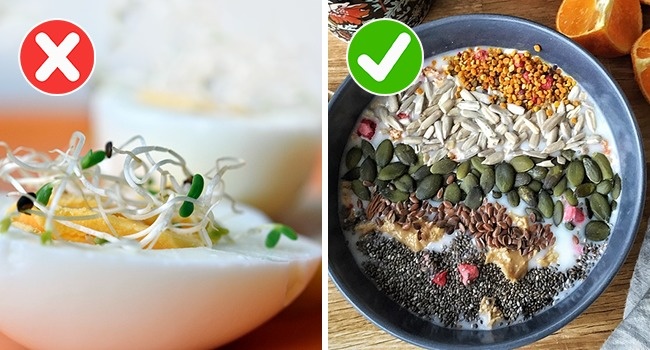 Why they’re forbidden: Because of E. coli and salmonella, which are found in food much more often than you might think. It’s also important to understand that we can consider healthy only those grains that haven’t been chemically treated, and this is very difficult to check.

What you can eat instead: Grains that were sprouted according to these rules or raw seeds (flax, pumpkin, sunflower), which are no less beneficial. 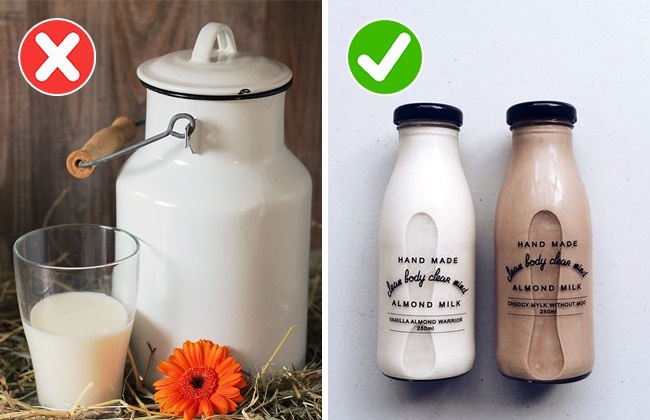 Why it’s forbidden: The conditions in which fresh milk is extracted cannot be called sterile, even if the owner takes good care of the cow. Hence there’s the possibility of viruses and bacteria in the milk, which can only be destroyed by boiling.

What you can drink instead: Boiled or pasteurized milk. 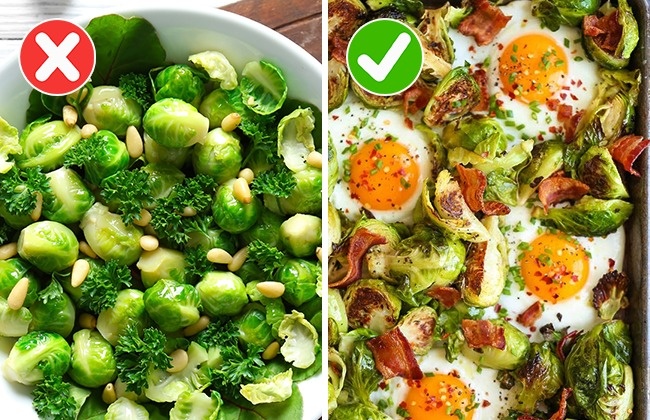 Why it’s forbidden: Over the past 20 years, Bill Marler had 30 cases involving poisoning with raw Brussels sprouts, and this is the reason to put them on this list.

What you can eat instead: To avoid E. coli and salmonella, it’s better to fry or bake Brussels sprouts at a temperature of at least 160°C (320°F). 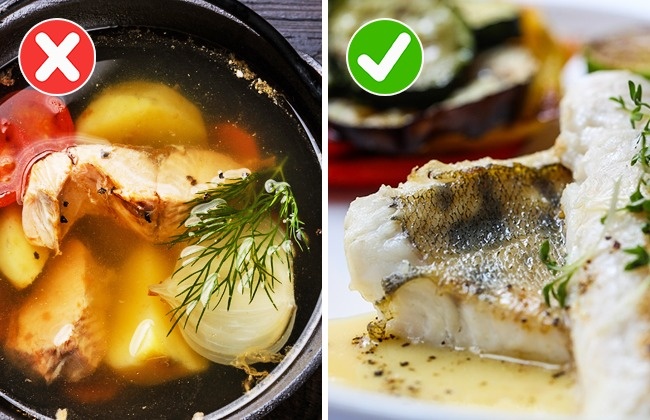 Why they’re forbidden: Spanish scientists from the University of Seville found out that cooking freshwater fish kills only 18% of life-threatening cyanotoxins. The remaining harmful substances enter the broth, which becomes a concentrate of toxins.

What you can eat instead: Steamed fish. The experiment showed this way of cooking kills 26% of cyanotoxins. 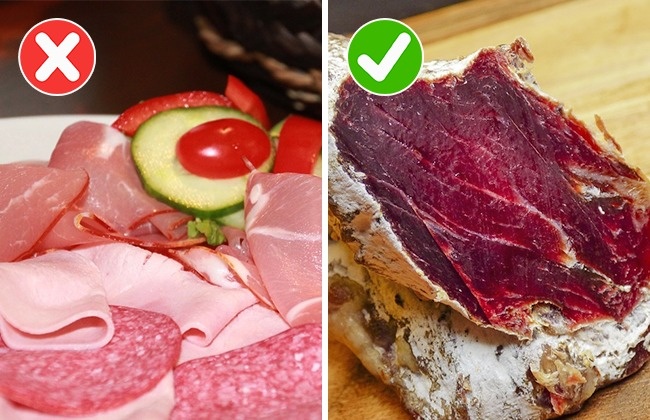 Why they’re forbidden: American studies confirm that even the most expensive and quality meat products contain nitrates and nitrites, which can cause cancer. 1 kg (2.2 lb) of sausage contains 400% more salt and 50% more fat than the same piece of beef.

What you can eat instead: Jerky meat (better if it’s homemade) combines perfectly with bread and butter, and it’s no worse than sausage.

2. Packaged food made of 2 or more ingredients 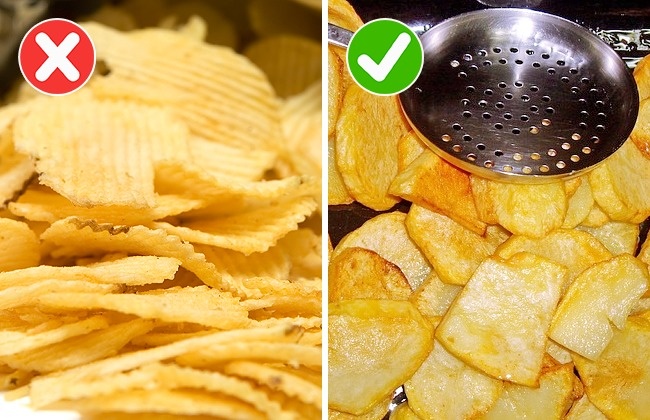 Why they’re forbidden: Manufacturers use butylated hydroxyanisole (BHA) and butylhydroxytoluene (BHT) as preservatives. High doses of these substances cause hormonal disorders. Besides, regular consumption of BHA causes the development of cancer tumors.

What you can eat instead: Canned and other food made by you. If you have time, it’s better to cook fresh meals every day.

1. Pre-washed and sliced vegetables and fruits 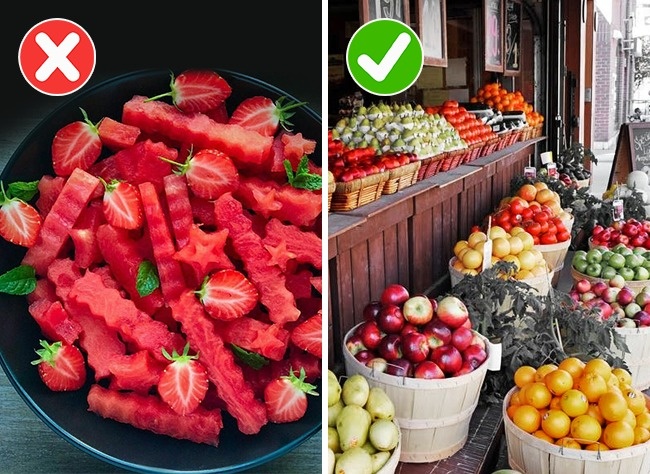 Why they’re forbidden: Fruits and vegetables that are sold washed and cut have already gone through several people’s hands. The more people that touch the food, the higher the chance it gets their bacteria.

What you can eat instead: It’s better you buy ingredients on your own to make a fruit salad at home.