The National No Bra Day is celebrated on October 13th, in order to promote breast cancer awareness and warn women about the dangers of wearing a bra. Bra was invented to keep the breasts in place, and it’s an ideal solution for women with larger breasts. However, there is evidence which suggests that bras do more harm than good. 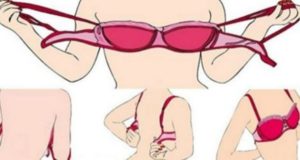 Jean Dennis Rouillion, a professor and sports science researcher at the University of Franche-Comte conducted a study about the positive and negative side effects of bras. The study lasted for 15 years and was done on 330 women aged between 18 and 35, who were wearing a bra from an early age. The results were shocking: the bras didn’t do anything to support the chest, reduce back pain or prevent the sagging. Actually, it was quite the opposite – wearing a bra makes the breasts even more saggy! During the study, the women that stopped wearing a bra had a 7mm lift in their nipples. Professor Jean says that bras can interrupt circulation, and that girls who don’t wear a bra can expect better elasticity due to the increase of collagen. We know that women are wearing a bra because they are not trying to distract people, but getting the bra off is actually far better and will improve the condition of your breasts.